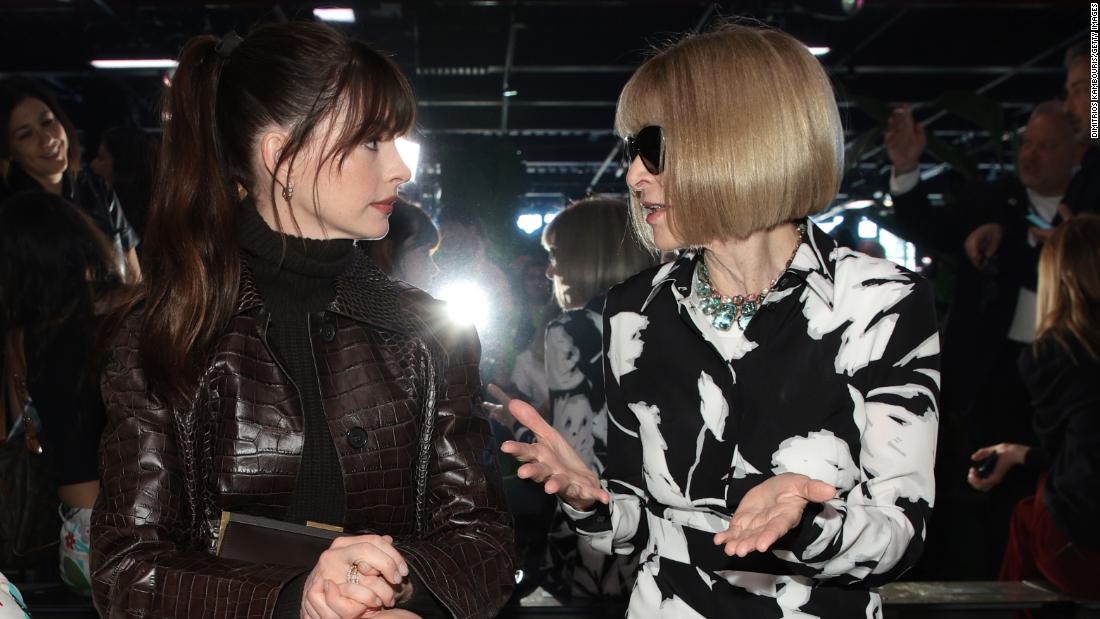 Featuring the good, the bad and the ugly, ‘Look of the Week’ is a regular series dedicated to unpacking the most talked about outfit of the last seven days.

Life imitated art on the front row of the Michael Kors show on Wednesday when assigned seating placed Vogue editor-in-chief Anna Wintour and actor Anne Hathaway next to one another in a display of PR genius.

Wintour was, as always, dressed in her signature look — a pair of dark sunglasses skewing her eyes and her quintessential blonde bob — but Hathaway’s outfit looked equally familiar. Wearing a black knitted turtleneck, a chestnut brown leather coat and her hair in a high ponytail styled with a blunt fringe, Hathaway was a facsimile of her on-screen character Andrea Sachs from the 2006 film “The Devil Wears Prada.”

The movie, based on Lauren Weisberger’s 2003 novel by the same name, chronicles the trials and tribulations of Sachs as she clumsily moves through the highest echelons of the fashion industry in pursuit of a career in journalism. She briefly ends up as the mistreated personal assistant to iron-fisted magazine editor Miranda Priestly (played by Meryl Streep), a character widely acknowledged to be inspired by Wintour herself.

Almost 17 years later, “The Devil Wears Prada” is still considered to be one of the most entertaining exposés on the absurdity of the industry. Seeing Hathaway sat shoulder-to-shoulder with the film’s muse in an outfit that seemed lifted out of her character Andrea Sachs’ wardrobe (all the while in the context of a real-life fashion show) was a full circle moment the internet quickly grabbed with both hands. “It’s giving Andy Sachs, 2022!” wrote fashion watchdog Instagram account Diet Prada, in a post that has been liked by more than 250,000 people since yesterday evening.

Hathaway looked the spitting image of her on-screen character Andrea Sachs from the 2006 movie “The Devil Wears Prada.” Credit: IMBD

But this isn’t the first time Hathaway has engineered a self-referential fashion moment. The actor has starred in a slew of films that have become pop culture relics: Including her stint as introverted teen-turned-princess Mia Thermopolis in “The Princess Diaries” franchise (2001-2004). At Cannes Film Festival earlier this year, Hathaway’s ethereal Armani Privé column dress worn to the red carpet screening of “Armageddon Time” went viral for its likeness to the regal attire often worn by her character as the Princess of Genovia.

The exquisitely meta meeting of Hathaway and Wintour is the perfect conclusion to New York Fashion Week — an event that was back and bigger than ever this season, after February shows were scuppered by ongoing Covid-19 restrictions. So uncanny is the glamorous paparazzi shot, you can almost hear Priestly’s haunting words whispered through her infamously pursed lips: “Everybody wants this. Everybody wants to be us.”