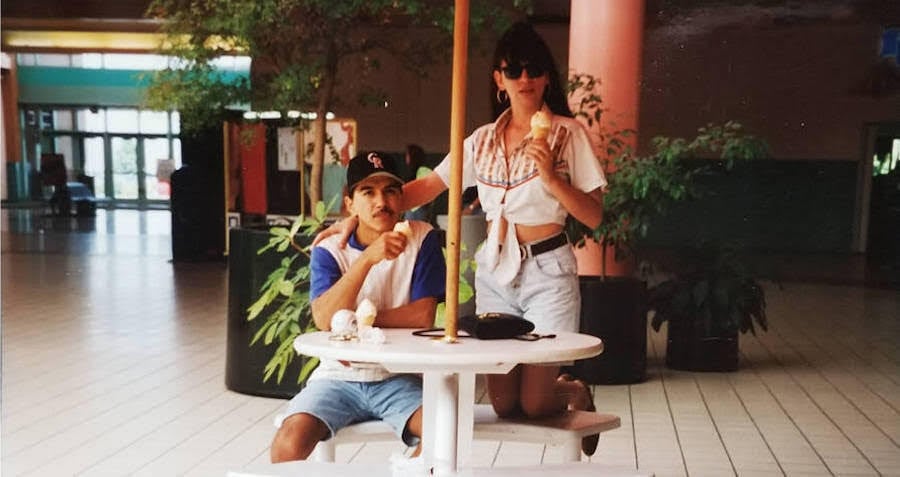 These pre-Instagram photos will take you back to the colorful shops, the noisy arcade, and the busy food court where you used to spend your Saturdays.

A couple enjoys ice cream at a Colorado mall in the early 1990s. u/LeVampirate/reddit

The Nickelodeon section inside a Blockbuster Video store. Circa 1996-1997.

Though Blockbuster used to be a common sight in shopping centers, there’s only one left today.

People crowd a kiosk at the famous Mall of America in Bloomington, Minnesota. August 12, 1992.

This shopping center remains successful today despite the age of the internet and other challenges that the mall has encountered in recent years.

The rotunda at the Mall of America. August 1992.Antonio RIBEIRO/Gamma-Rapho via Getty Images

The music and entertainment retailer used to be a common sight across America, but there are now only two Sam Goody stores in existence as of 2022.

Who says that heavy metal and a mall stroller can’t go hand in hand?

A young boy and his mother play a game at an arcade.

During the 1980s and 1990s, malls were some of the most popular places for young people to gather, even if they weren’t necessarily in the mood for shopping.

Even if mall visitors didn’t go inside any stores, the shopping center was still a great place to see and be seen.

Inside the Discovery Channel Store at the Mall of America. Circa 1998.

This retail “edu-tainment” store is no longer in existence.

At the height of mall culture, you might have even seen a celebrity at a local shopping center. Here, the pop band Hanson prepares to sign autographs at a Sam Goody store in Universal City, California. May 10, 1997.SGranitz/WireImage

Ice cream was one of many treats available at mall food courts. Photo by Michael Galinsky. rumurpix/Instagram

After 45 years of serving the community, the shopping center closed down for good in 2021.

A local hip-hop dance competition at the Wilderness Theatre at the Mall of America. 1997. DARLENE PFISTER/Star Tribune via Getty Images

A Nintendo display at an unidentified mall in 1985.
u/optsyn/reddit

A lucky group of kids who got to visit the Mall of America for a school project. 1997. DARLENE PFISTER/Star Tribune via Getty Images

Though pay phones still exist today in some shopping centers, they were used more often in the 1980s and 1990s.

Teens lining up to get into the Mall of America in 1996. JERRY HOLT/Star Tribune via Getty Images

Mall visitors take a break at the Cleveland Arcade in Cleveland, Ohio. October 1993.

Originally built in 1890, the Cleveland Arcade was one of the first covered shopping malls in the United States. The stunning landmark, which underwent an extensive renovation in 2001, is still around today.

A group of friends playing Dungeons & Dragons at a mall food court. 1992.u/mattjh/reddit

A group of skater boys in the wild at the Mall of America. August 19, 1996.JOEY MCLEISTER/Star Tribune via Getty Images

Shoppers browse the many stores that make up part of the Union Station in St. Louis. 1999.David Butow/Corbis via Getty Images

An unidentified shopping mall in the United States, decorated with palm trees. Circa 1980s.Carol M. Highsmith/Library of Congress

Shoppers walk down the aisles of a Toys “R” Us store in Framingham, Massachusetts. 1995.Michael Robinson Chavez/The Boston Globe via Getty Images

A “recyKIDables” kiosk at the Mall of America. 1996.CHARLES BJORGEN/Star Tribune via Getty Images 44 Photos That Capture The Height Of America’s Mall Culture

In the 1980s and 1990s, the shopping mall was one of the most iconic meeting spots for young Americans. Not only was the mall convenient for one-stop shopping, but it was also a great place to see and be seen.

It was easy to spend an entire day at one of these churches of consumerism. Not only was there a myriad of shops catering to every taste, but there were also restaurants, beverage stands, and entertainment.

Even if you didn’t have a single item on your shopping list, you could play Pac-Man at the arcade until you ran out of tokens. Or you could wander down to the theater to catch a new blockbuster flick. Or you could just loiter around the food court until one of your friends bought you a greasy slice of pizza. Even better, all of this was contained in a nice, handy loop that often centered around something memorable, like a fountain or carousel.

There’s no question that the shopping mall was once considered a hub of modern civilization in many American cities and towns. But like most popular places, you probably had to beg your parents to drop you off there.

It may be hard for today’s kids to imagine that the huge, crumbling building in their town with the parking lot overtaken by weeds was once the place to be. Vintage mall photos like the ones above help keep the memories alive. 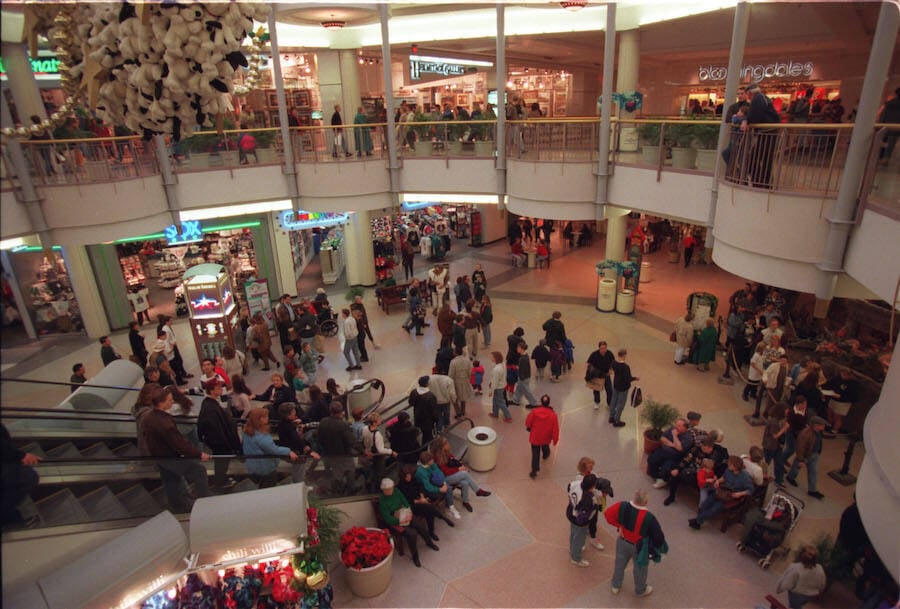 Cheryl Meyer/File Photo/Star Tribune via Getty ImagesA vintage photo of the Mall of America, the largest shopping mall in the United States, in 1995. The mall, located near the Twin Cities of Minnesota, remains a popular destination for both locals and tourists today.

Much has been said about how malls have become increasingly abandoned since the early 2000s. In fact, there are a number of websites today that are devoted to chronicling post-apocalyptic-looking “dead malls.”

The decline of the mall has been largely attributed to the age of the internet — which of course includes online shopping. Now, there are so many websites to buy items from that it can almost be overwhelming.

But it’s still worth celebrating the mall in its heyday. As many of us remember, malls were about more than just shopping. A trip to the mall was often an experience of relaxation and fun. It was also a central place for many youths to build community, a privatized public square of sorts.

Photographer Michael Galinsky recognized malls for what they were back in 1989. That’s when he started taking pictures at a Long Island mall for an NYU photography class. Afterward, he toured malls across America — capturing some of the purest candid shots of people interacting in these spaces.

When photo digitization rose in popularity, so did the demand for these vintage mall photos. So Galinsky took his collections of mall pictures and put together books — which sold out quickly. Now, his website Rumur houses some of the best time-capsule shots of the mall era.

These images are sure to bring many ’70s and ’80s babies back to the colorful stores, the noisy arcades, and the busy food courts of their youths. In a digital age when everyone seems to be glued to their phones, it’s hard not to be nostalgic for simpler, pre-Instagram times at the mall.

But this doesn’t mean that we should mourn the death of all malls… at least not yet. Some iconic shopping centers, such as the Mall of America, are still going strong today. And according to Refinery 29, some people believe that the shopping mall in general might even be staging a comeback.

“The ‘shoptainment’ — the entertainment of shopping — is coming back, especially for that younger consumer,” explains Tamara Szames, an industry advisor with the trend forecaster NPD Group. She also muses that many of us are craving in-person shopping again after the restrictions on our social lives at the height of the COVID-19 pandemic, noting, “We also can’t lose touch that we’re human. We like that interaction and that experience.”

After looking through these vintage mall photos, check out these abandoned malls that have been reclaimed by nature. Then, discover these pictures from the 1990s that perfectly encapsulate the decade.